An interesting ink blotter recalls the days of the giant Union Typewriter Company – really, a trust company that would eventually be made illegal – and its move to enter the rebuilt typewriter market. 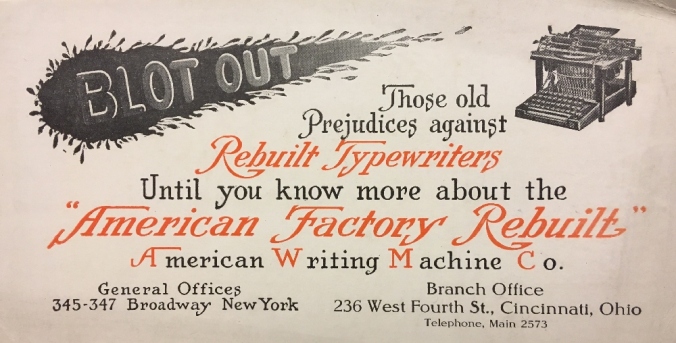 This clever ad piece asks us to “blot out those old prejudices against rebuilt typewriters” by availing ourselves of the details of American Writing Machine Company’s offerings.  This is slightly ironic considering the fact that the companies involved in Union had resisted and even counter-advertised against rebuilt (and against visible) typewriters for some time before swinging over to where the cash was to be had.

The presence of an upstrike Remington machine on the blotter hints that the date of this piece is early – early that is, in relation to the time AWMCo halted manufacture of its own line of machines (Caligraph / Century) and turned to rebuilding all makes of machines in 1906-1907.

The changeover of AWMCo was just one piece of the ponderous transition of the Union affair into something more modern and competitive.  Formed in 1893, Union was a trust that held control over the patents and factories of Wyckoff, Seamans & Benedict (makers of the Remington typewriter), Smith Premier, Densmore, Yost, and American Writing Machine.  The trust kept prices of its machines high and set standards for quality and service.  However, while such trusts were at least in part meant to eliminate competition (by ensuring all profits of all makers went into a common fund, thus being able to support weaker members and so maintaining apparent competition) others from the outside with new ideas and capital charged to the fore with new machines and forced Union to change its principles.

Union had to do two things; it had to replace its upstrike machines of all makes, and it had to enter the rebuilt business.  If it did neither, either could kill it or help to.  But the giant conglomerate couldn’t just write off all of its present assets overnight.  So it took a few years to set up production of a wholly new machine (the Monarch) by 1904, and then moved to halt production of the AWMCo New Century machine and convert that plant to rebuilding in 1906-7.  In 1908 the new “visible” machines of Remington, Smith Premier, and Yost appeared and at about this time Union also absorbed Pittsburg Writing Machine Co., maker of a less-than-$100 four bank frontstrike.  (Densmore was dropped in 1910 without converting.)

With these moves – namely, converting big $100 brands to front strike “visibles,” buying and integrating a lower-price standard machine, and changing a capable plant to become a rebuilder / retailer / wholesaler, Union had made great strides to meet the competitive situation.  It knew, as did all others sooner or later, that the rebuilt market would exist whether it moved to enter it or not – and by not entering, it could only be hurt by it.  Considering that AWMCo remained in business well into the 1930’s rebuilding machines (and, handling the new-old-stock parts of L. R. Roberts after Remington used its Remington-Noiseless subsidiary to buy that firm out at auction in 1927) it made the right call!

American Writing Machine Co. letterhead, 1930. This letter was sent as the result of an inquiry into Blickensderfer keys, which AWMCo was handling as a result of the 1927 buyout of Blick’s descendant company, L. R. Roberts.  AWMCo. advised the gentleman that all key buttons were totally sold out, and suggested the purchase of a new Rem-Blick.

Translate “On the Margin”